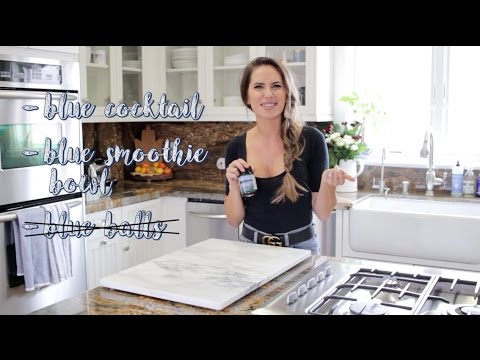 Blue Majik™ by E3Live® powder is the world's only Certified Organic Blue Spirulina. Blue Majik™ is a proprietary, chemical-free extract of Arthrospira platensis (Spirulina), a Nutrient Dense AquaBotanicalTM. Its stunning blue pigment contains both phycocyanin (PC) and non-PC compounds. This unique combination is not seen in standard Spirulina powder. PC is clinically shown to relieve physical discomfort, which means consumers feel better, can do more activity, and enjoy an overall better quality of life.

Clinical research suggests that Blue Majik™ by E3Live® may promote:

Blue Majik™ by E3Live® Powder is:

Its stunning blue pigment contains both Phycocyanin (PC) and non-PC compounds. The PC level is greater than 30% in Blue Majik™ FP-80, sometimes it is much higher but never lower than 30%.

: 1g 1-2 times per day. Remember to drink plenty of water during the day!

: Store in a cool dry place away from direct sunlight', 'Once opened, ensure pack is tightly sealed after each use'.

To ensure our E3Live® Fresh-Frozen Superfoods arrive in its freshest possible state, we ship in quantities of 6 or more. The 6 bottles can be mixed with other Fresh-Frozen products. We have found a minimum of 6 bottles keep your order optimally cold during transit.

A There's only one ingredient in E3Live, and that's 100% Aphanizomenon flos-aquae (AFA), an edible freshwater plant. AFA is at the very foundation of the entire food chain.

Although it has been eaten for centuries by indigenous peoples, for the first time in history, AFA - nature's most basic food - is available in its complete, vital, fresh-frozen LIQUID form.

Aphanizomenon flos-aquae (AFA), meaning invisible flower of the water, is a fresh water nutritional plant referred to as cyanophyta. Cyanophyta are Energized Water plants that grow in nearly all droplets of sunlit water and in every gram of soil, on the bark of trees and the surfaces of rocks. It is estimated that there are as many as 50,000 species, including various seaweeds and plankton.

Collectively, cyanophyta are responsible for 90% of the Earth's oxygen and 80% of its food supply. Perhaps the most interesting of these unicellular plants are the cyanophyta community, of which there are about 1500 species--the Upper Klamath Lake, AFA, being one of them. AFA is a very special form of cyanophyta. All foods reflect the environment in which they are grown. The beautiful, unpolluted Upper Klamath Lake-one of the few remaining alkaline lakes on the planet holds the key to its remarkable potency.

This lake has an astonishingly high mineral concentration due to a massive volcanic eruption that occurred in the vicinity over 7,000 years ago, covering the area with millions of tons of mineral ash. Seventeen streams and rivers deposit into the 140 square mile lake an annual average of 50,000 tons of the mineral-rich silt from the surrounding 4000 square mile volcanic basin, making Upper Klamath Lake one of the richest nutrient traps in the world.

Much has been learned about this amazing food since it became available as a food source over 20 years ago. There are more benefits being discovered every day as this cyanophyta is introduced to the medical and scientific communities. AFA has been available in powders and capsules, but now for the first time in history, AFA is available in its much more potent and vibrant fresh-frozen LIQUID form in Australia!

How Do I Defrost E3Live?

Find one of those plastic ice trays that has a lid (to keep freezer odours out) and fill the tray with your thawed E3Live (make sure that you measure so that each cube equals one serving for you). Put the tray back in the freezer. When you want to add E3Live to your juice you can use an "E3Live Cube" as your serving size.

How Do I Eat E3Live?

Some consumers love the natural taste of E3Live and drink it undiluted. Others mix E3Live in non-citrus juice, such as apple, grape, etc. You can mix in into a delicious fruit smoothie or a green drink, too. Many of our clients tell us that adding the "Green Blend" to their E3Live in the same smoothie or juice drink (or water) really produces a synergistic effect that enhances the benefits of both products.

Try making your own drink recipes with the E3Live, just do not expose it to hot temperatures as that will destroy the natural enzymes in it.

How Much E3Live Should I Eat Each Day?

No two people are alike. For most, we recommend starting with 10 to 15mL per day. Some people will eat E3Live in more liberal quantities even up to a bottle per week or whenever they need an added boost. For example, when Grant Hackett was training for the 2000 (Sydney Olympics), 1500m frestyle event, he was training for 6 hours per day. His intake of AFA fresh-frozen was approximately 240mL's per day! Work your way up at your own pace. Trust your intuition.

How Can E3Live Help With My Specific Medical Condition?

As with anything concerning your health, it is best to consult with your healthcare professional prior to consuming E3Live or E3AFA if you have any concerns regarding your health or a specific medical condition.

I Accidentally Thawed the Whole Bottle of E3Live... What Do I Do Now?

If you defrosted the bottle of E3Live in your refrigerator or in a cool bowl of water, and it hasn't been thawed for more than a few hours, it should be fine. Just pour off the portion for the week that you need, then refreeze the rest. Alternately you can pour off your weeks' worth, then make single-serving E3Live ice cubes by pouring into ice cube trays that have resealable lids (to keep freezer odours out). Add the single serving cube to your water or juice as your daily dose of E3Live.

If the E3Live has thawed out in a very hot room, has been out for many hours, has thawed outside in the sun, or some similar undesirable condition - check it for colour and smell. If it spoils, it will turn a muddy brown colour and have a rancid smell that will tell you that it has spoiled. If this happens - you can always mix it with water for an awesome plant fertilizer!

What's the Difference Between E3Live and E3AFA?

Both are 100% Aphanizomenon flos-aquae (AFA) a freshwater plant harvested from Klamath Lake in Oregon.

E3 AFA is the Hydro-Dri, dried powder form of the AFA, which comes as either vegetarian capsules or loose powder.

Both are excellent foods. E3Live's live liquid form is closest to its natural high-energy state found in nature and is the ideal way to consume AFA. Our Refractance-Window drying method retains much of AFA's original nutritional and energetic properties. We recommend our Refractance-Window dried E3 AFA to further boost nutritional intake, as well as for your convenience at work and while traveling if refrigeration is not available.

What's the Difference Between E3Live and Man-Made Nutritional Supplement

E3Live is a whole, organic freshwater plant found in the wild that has both discovered and undiscovered nutrients. These nutrients are 97% fully assimilated. Only a fraction of the vitamin content of more expensive "health food vitamins" are actually absorbed by the body. Man-made supplements only contain what the formulators choose to include.

How is E3Live Different from Other Brands of AFA from Klamath Lake?

E3Live is the only AFA that is live, liquid and delivered to you closest to its natural state. E3Live is selectively gathered by our expert harvesters, and collected from only the deepest, most pristine waters of Upper Klamath Lake. We harvest only at peak times of optimal growth, when the AFA is the heartiest, healthiest and most vibrant.

Harvesting AFA is an art AND a science. We discovered that the strongest and freshest AFA possesses the highest life-force.

The benefits of AFA are directly proportional to the quality of the harvesting source, and how the AFA is handled at every step of the process. We take pride in knowing that we bring you the most potent and powerful AFA in the world.

E3Live's superior harvesting and proprietary filtration methods ensure the absolute highest quality. The AFA is selectively harvested so that only the purest, most vibrant blooms are gathered. Starting at our harvest site, E3Live is immediately chilled to preserve its natural vitality and highest nutritional value. We work hand-in-hand with the most experienced, conscientious harvesters and knowledgeable researchers in the world.

How is the Consistent Quality of E3 Products Assured?

From the moment we harvest the AFA, to its final packaging, we work with only the most highly trained and qualified staff. We handle our AFA with such care from start to finish. Factors contributing to this quality include: where and how we harvest, keeping the AFA cold at all times, superior filtration and storage, and ongoing quality-control testing of all of our products. All E3 products are tested thoroughly by independent USDA certified labs for food safety, shelf-life and various other purity tests. A Certificate of Analysis (COA) is provided with every product!

The benefits of Aphanizomenon flos-aquae (AFA) are directly related to the care and attention given to sourcing and harvesting the product. Our quality care begins with the selection of the freshest AFA "blooms" from pristine Eagle Ridge. The harvesting is quickly followed by rapid chilling of the AFA to 34 to 37 degrees Fahrenheit. Next, our E3Live is further purified by careful centrifugation, leaving a product chilled and scrupulously clean. E3Live is handled more expeditiously from harvest to freezer than any competitive product. Our quality control parameters, coupled with our proprietary final processing, yields the Lake's most potent source of AFA.

Unless you know the source of your AFA, there is no guarantee of quality. E3Live and other E3 AFA products are harvested by the most competent harvesting team, and staff of engineers in our industry.

Because people report AFA helps such a wide range of physical and mental symptoms, it's easy to fall into a "magic bullet" mentality associated with pharmaceutical drugs. AFA doesn't work that way. Aphanizomenon flos-aquae is an extraordinary food, not a drug or synthesized vitamin.

Artificial drugs are synthesized in the laboratory to produce specific effects on targeted cells, organs, or body functions. Though some drugs save lives, unfortunately, some drugs also create unwanted side-effects.

In contrast, Nature's innate wisdom works through AFA's full spectrum of over 65 perfectly balanced, naturally occurring vitamins, minerals, amino acids (protein) and essential fatty acids. AFA helps restore overall biological balance and nourishes the body at the cellular level. AFA is 97% absorbable by the body, compared to man-made vitamins which are only 5% to 25% absorbable. Without any toxicity or side-effects, this is how AFA can have so many beneficial nutritional and energetic effects throughout the body.

When (After Eating E3Live) Will I Notice a Difference?

The beneficial effects of E3Live and E3 AFA in your body can be subtle as it works to provide long-term protection and well-being. Some people may experience noticeable changes within a few weeks of use - others may notice differences right away or, conversely, notice no effect whatsoever.

It is important to maintain a healthy diet and exercise regularly in order to reap the full, long-term benefits of AFA. And, while the benefits of consuming AFA may not always be visibly manifested, be assured its phytonutrients are working "behind the scenes" throughout your body's internal systems.

You have successfully subscribed!
This email has been registered